Another piece in the puzzle of pollen development

The viability of pollen is crucial for yield because pollen tubes carry the male gametes to the embryo sac to achieve fertilization. Pollen development takes place in the anthers, which consist of four cell layers, the epidermis, endothecium, middle layer, and the tapetum as the innermost layer. The tapetum is a single cell layer enclosing the developing pollen (Figure 1 A-D). Coordinated tapetum degradation by programmed cell death goes together with cell shrinkage, vacuole rupture and DNA fragmentation and is essential for pollen development, because the degradation provides signaling molecules, nutrients and structural components for pollen development and affects lipid metabolism. Since 2014, the teams of Shuangcheng Li and Ping Li have carried out large-scale screening for male sterile germplasm in ethyl methane sulfonate (EMS)-induced mutant libraries to explore genes related to rice pollen development. Here, they identified a mutant with disrupted seed set from this library (Zou et al., 2022). The mutant exhibited pale yellow anthers smaller than those of wild type (WT), and was designated as aberrant microspore development1 (amd1). The mutant pollen was inactive, shrunken and smaller than those of WT (Figure 1E and H), and the tapetal cell layer did not degenerate. Ubisch bodies, which are small acellular structures of sporopollenin on the surface of the WT tapetum, were not present in amd1 microspores. The outer layer of the pollen grain, the exine, consists of sporopollenin polymers and protects the pollen from environmental stresses. In WT, the exine is comprised of a well-organized tectum, the bacula, and the nexine. In the amd1 mutant, however, the exine was wrinkled with indistinguishable bilayer structures due to abnormal bacula formation (Figure 1 F and I).

Zou et al. mapped the mutation in the amd1 mutant to LOC_Os01g55094, encoding for a grass-specific transcription factor. They showed that AMD1 was expressed in anthers, specifically in pollen mother cells at early stages, in the tapetum, meiotic cells and microspores and that the protein localized to the nucleus. They identified AMD1 as a transcriptional regulator with transactivation activity dependent on its N-terminal conserved domain and its downstream targets genes were associated with lipid metabolic pathways. Given that pollen grains of the amd1 mutant also accumulate less lipid on their surface than WT pollen, and that sporopollenin consists mainly of polymeric lipid compounds, this suggests that sporopollenin production might be hampered in the mutant because of disturbed lipid metabolism. Furthermore, AMD1 affects the expression of several genes related to tapetum and exine development, among others of genes that encode for enzymes that process fatty acids and alcohols as components of sporopollenin precursors. AMD1 was also identified as interaction partner of TAPETUM DEGENERATION RETARDATION (TDR), a key transcription factor regulating tapetum degradation and exine formation, and both transcription factors probably have common downstream targets to regulate male fertility.

Taken together, Zou et al.  identified AMD1 identified as novel transcriptional activator of exine formation and tapetum degradation. Disrupted tapetum development and disturbed timing of degradation leads to male sterility, as observed in the amd1 mutant. A system called Seed Production Technology (SPT) was recently developed to produce recessive GMS lines in crops. By transferring a construct containing the wild-type fertility restorer gene, a pollen lethal gene (an α-amylase gene) and a selectable marker gene into the recessive GMS mutant, SPT enables GMS lines to reproduce in large numbers. Thus, the wild-type AMD1 gene could similarly be coupled with an α-amylase gene and a marker gene and introduced into the amd1 mutant to produce male-sterile amd1 lines on a large scale for hybrid seed production. 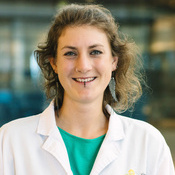 Plant molecular biologist with a great passion for root development and signalling pathways. After completing my PhD studies at the University of Düsseldorf, Germany, I worked at the University of Bonn, Germany, and currently at the King Abdullah University of Science and Technology (KAUST), Saudi-Arabia. My work has focused on studying the molecular mechanisms guiding root development of model plants and cereals, such as barley and rice, but also the parasitic plant Striga and date palm.