We have 100 years of history! Read about the SEB foundation and some key facts.

Experimental zoology became an active field of research in the 1890s after being developed in Germany and America. It was mainly concerned with locating casual factors behind ontogeny and physiology of individual organisms, and introducing the experimental techniques of physics and chemistry into the field of zoology. However, it was not until the UK's Marine Biological Association built a new laboratory in Plymouth dedicated to experimental zoological research in 1920, that the field gained a footing in the UK. This sparked the formation of the Journal of Experimental Biology and the Society for Experimental Biology.

The origins of JEB and SEB revolves around the actions of three key scientists:

In 1919, Julian Huxley acquired a position at the Zoology Department of Oxford University, and later that year produced a paper describing how he had induced metamorphosis in axolotl tadpoles through thyroid feeding [1]. He consulted Lancelot Hogben, a lecture of zoology at Imperial college of science who read the “draft with great interest” and repeated Huxley’s experiments confirming his findings. The two developed both a friendship and working relationship, collaborating on a paper on amphibian metamorphosis in 1922 [2].

Separately to this, Francis “Frank” Crew had returned from WW1 having served in the Royal Army Medical Corps no longer wishing to practice medicine and so began pursuing a career in experimental zoological research. In 1920 he was appointed the director of the Animal Breeding Research Department (ABRD) in Edinburgh [3] where he pursued his research focused on physiological genetics and intersexes in vertebrates, an area of interest also shared by Huxley. The two became acquainted and began a collaborative research project looking at the effect thyroid feeding in fowls [4]. Huxley used this new friendship with Crew to persuade him to hire Hogben at the ABRD.

Founding of the Journal of Experimental Biology

The three published several experimental biology papers in various journals of the Royal Society and The Marine Biological Association but became frustrated with the lack of editorial and policy control they had for these journals so soon set about discussing the creation of a new experimental journal. They also gathered input from their peers, notably John Burdon Sanderson Haldane who was mentioned personally in a first-hand account by Hogben and played a key role in initial discussions. The new journal came to fruition with the help of fellow biologist, Carr-Saunders. Crew secured printing with the firm Oliver and Boyd and personally underwrote a £200 guarantee, while Carr-Saunders convinced three professors from the University of Liverpool to join the editorial board:

At Hogben’s suggestion, they also invited the plant geneticist R. Ruggles Gates from Kings College London to join the editorial board in the view to include experimental botanists as well as zoologists in the publication. In the end, very few plant biologists ever submitted papers and by volume six the journal was completely zoological in nature.

No one from the University of Cambridge was included on the editorial board initially, which proved a point of contention due to the fact it was one of the only UK institutes to conduct experimental biology research and include experimental biology in its teaching at the time. This led to the reproductive physiologist Francis H A Marshall also being invited to join the board. With the editorial board complete the British Journal of Experimental Biology (BJEB) was born and published their letters announcing the new Journal in Nature and Science in the summer of 1923.

Founding of the Society for Experimental Biology

It was at a board meeting of the BJEB in May 1923 that the idea was formed to create an association to support the journal and further the cause for experimental zoology in the UK. A preliminary meeting, organised by Hogben, was held in Liverpool in August of the same year. Here it was decided that Hogben should organise a follow up conference in December to consider the formation of an Association. He set about sending letters to assess the viability of such a conference and association. The editorial board of the BJEB backed the idea with full support, as did many researchers based at the University of Cambridge and the Marine Biological Association Plymouth Laboratory.

You are invited by the Editorial Board of The British Journal of Experimental Biology to attend a conference at Birkbeck College… 21st and 22nd December 1923 for the purpose of considering and proceeding with the formation of an Association to promote intercourse, discussion and facilities of publication among biological workers engaged in experimental lines of enquiry.

A snippet from the invitation

The British Journal of Experimental Biology

The conference was a great success with 99 attendees from all areas of experimental biology, and the final conference programme included 13 zoological papers, 3 on plant biology, and 4 “general papers”. At the event, the association was formally named the Society for Experimental Biology and Hogben was voted as the zoological and physiological secretary. Even though the majority of papers presented at the conference were based on animal biology, a large number of experimental plant biologists also turned up and so in an effort to draw on this support from the plant biology community, Ruggles Gates was voted the botanical secretary. It was also here that intention of the Society was laid down:

The formation of the SEB wasn’t without controversy. Other Societies were disconcerted at its formation including the Linnean Society and Zoological Society as many of the founding members also held membership or board positions at these organisations. The Genetical Society (GS), founded in 1919, was openly hostile to the formation of the SEB not least because more than half of the eligible members for the GS joined the SEB within the first year. This was mainly a reflection of the specialised nature of The GS verses the broader remit of the SEB. Tensions were appeased when Hogben, who was greatly upset at any conflict between the Societies, offered the founder and vice president of the GS, William Bateson, a seat at the SEB council.

Over the years the SEB grew from strength to strength and continues to promote the importance and impact of experimental biology in all areas. 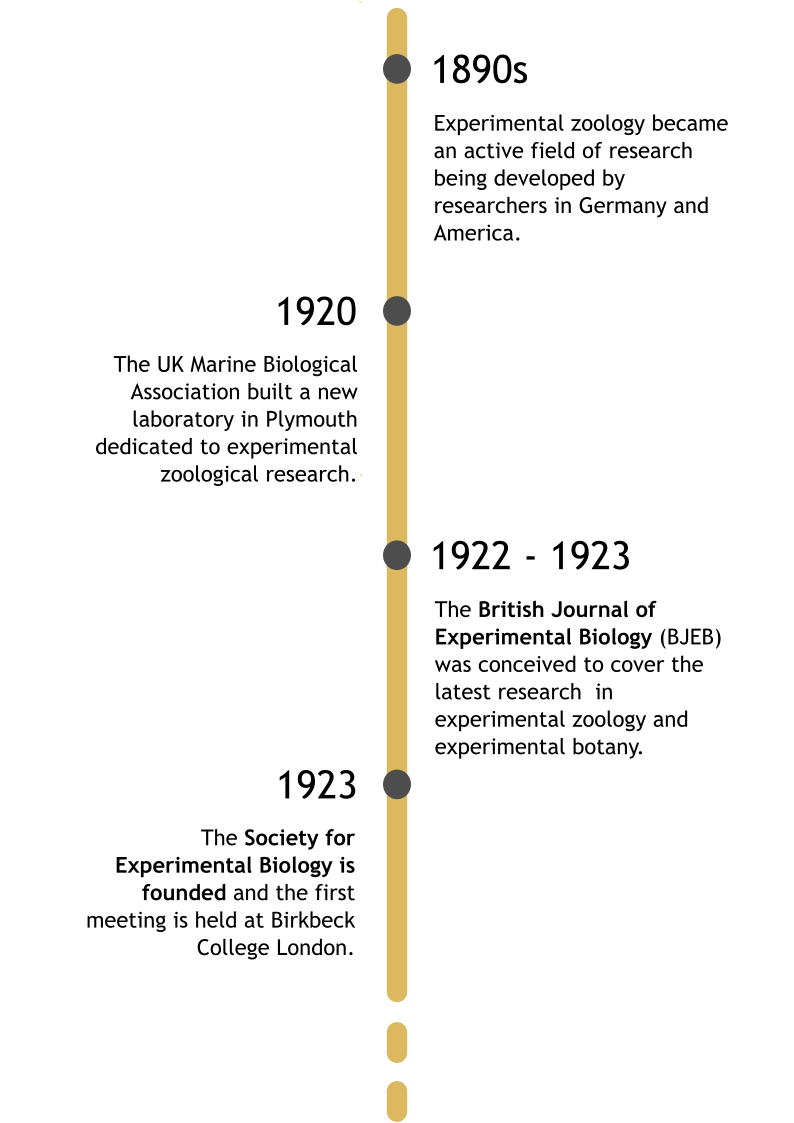 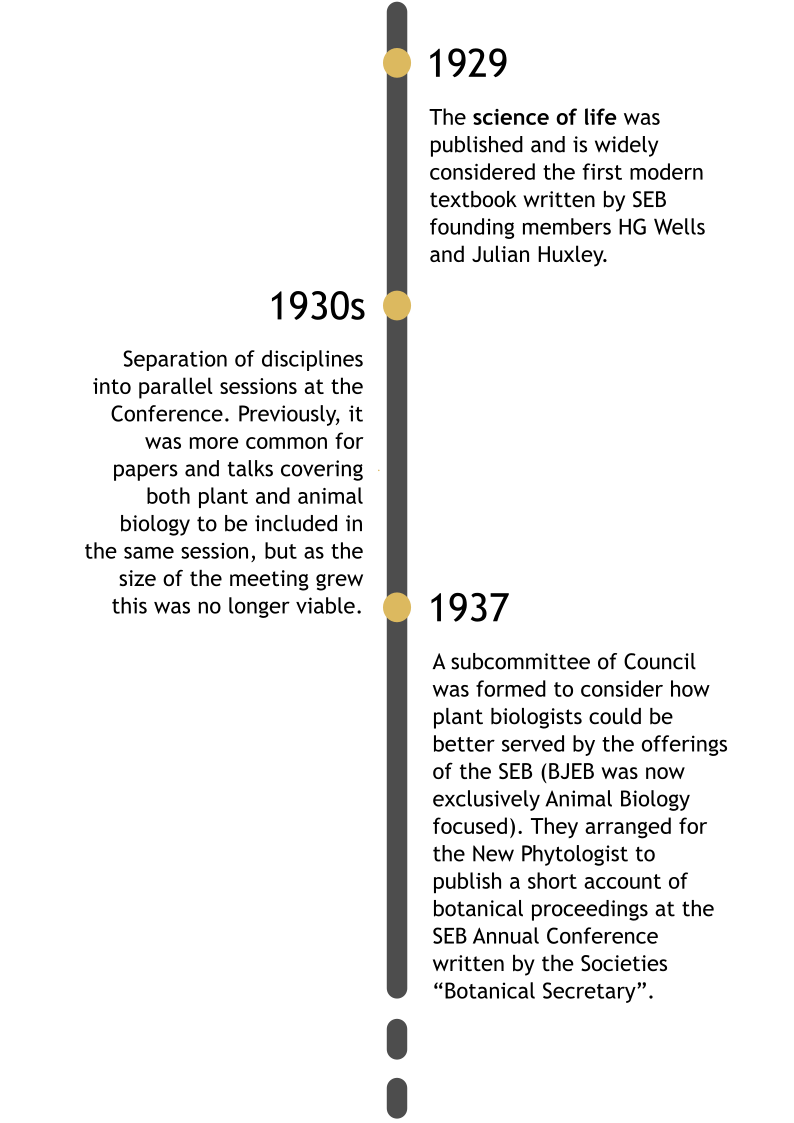 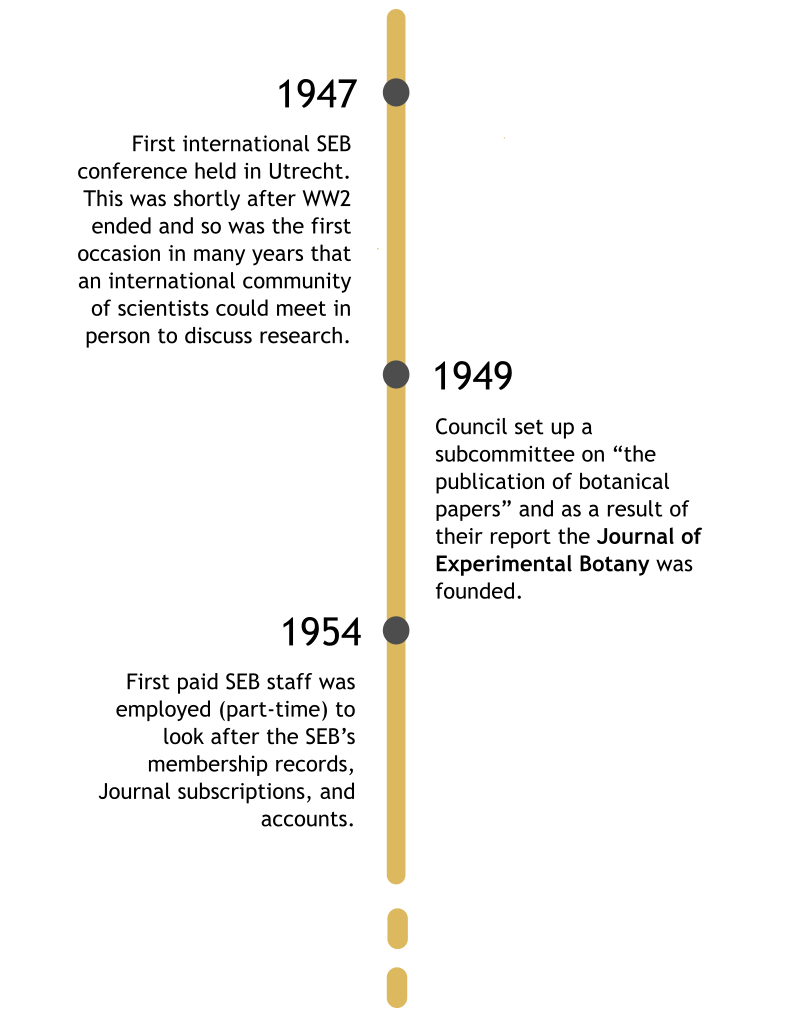 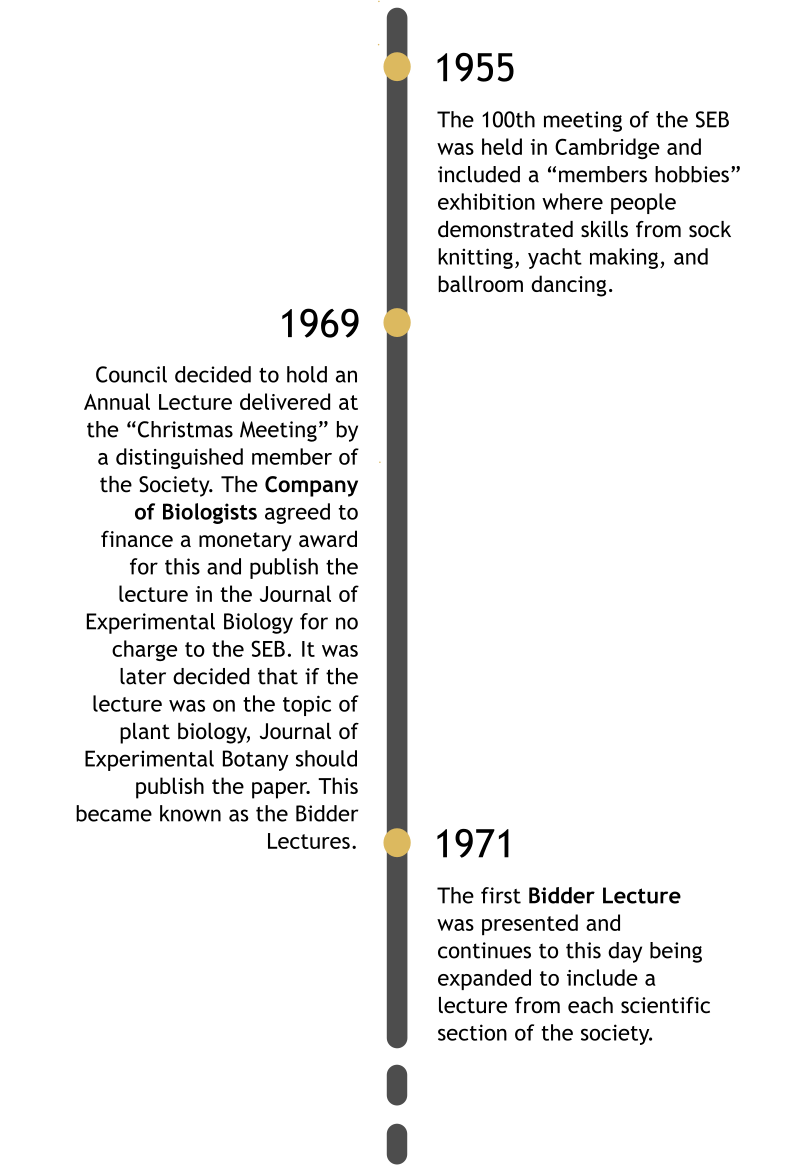 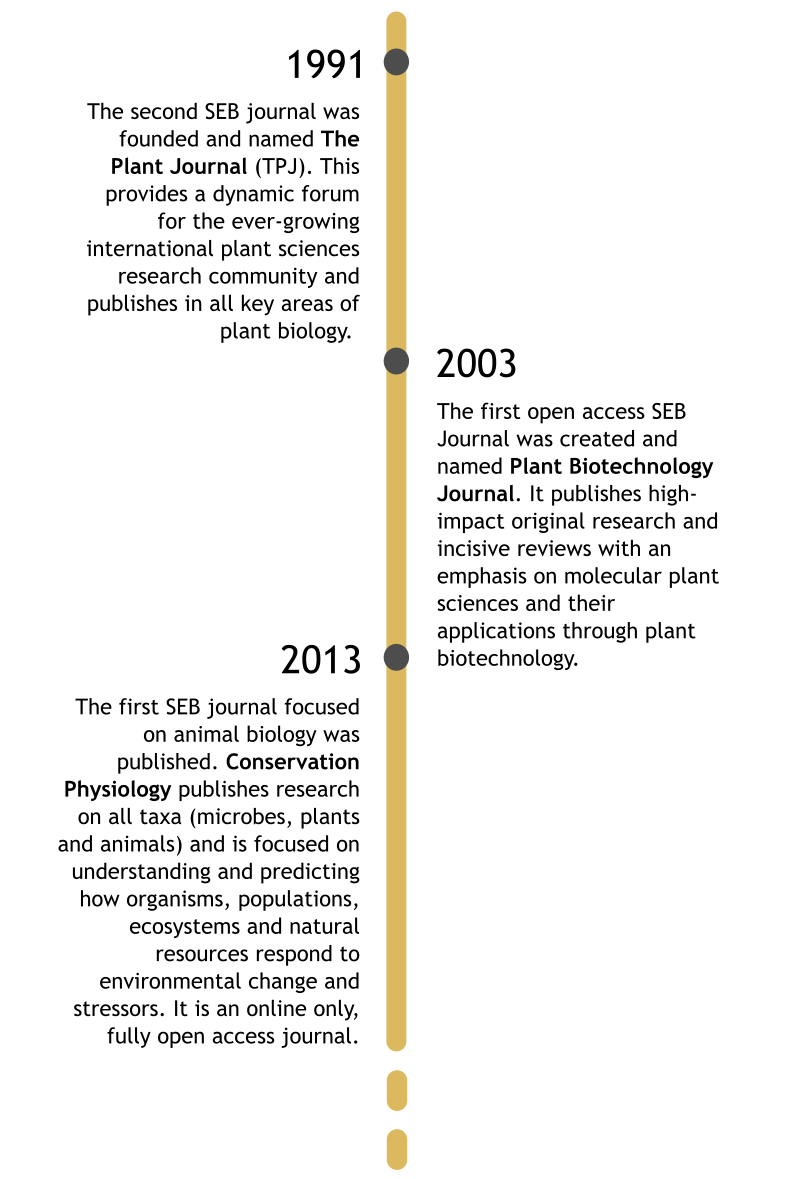 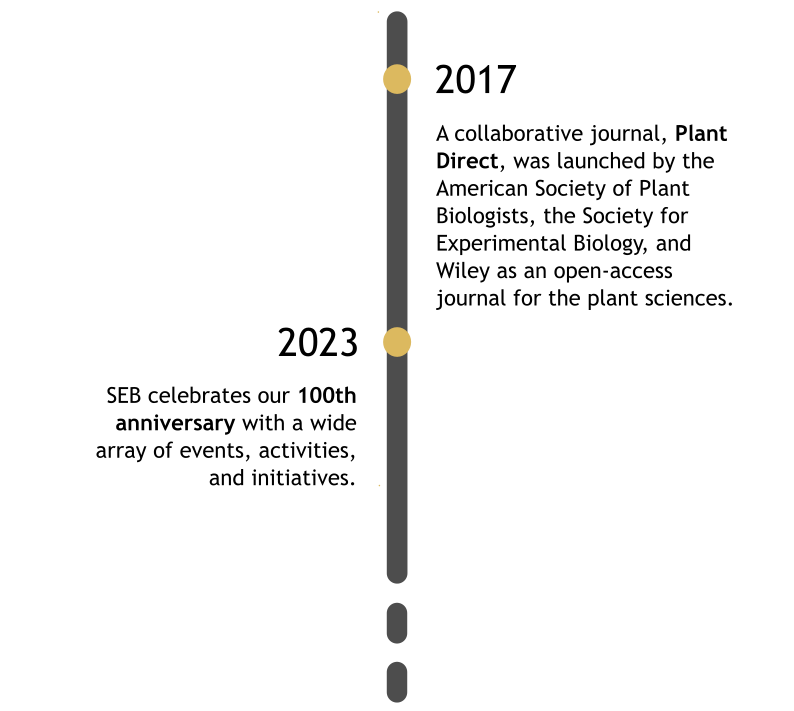 Maybe it's the memories of your first conference, an inspiring lecture you attended, a time you won an SEB award or grant, or holding a past seat on council?

Whatever your story, we'd love to hear about it. Use the form below to share your memories of the SEB with us.

[1] HUXLEY JS. 1920. Metamorphosis of Axolotl caused by Thyroid-feeding. Nature 104, 435–435.
[2] HUXLEY JS, HOGBEN LT. 1922. Experiments on Amphibian metamorphosis and pigment responses in relation to internal secretions. Proceedings of the Royal Society of London. Series B, Containing Papers of a Biological Character 93, 36–53.
[3] BUTTON C. 2017. James Cossar Ewart and the Origins of the Animal Breeding Research Department in Edinburgh, 1895–1920. Journal of the History of Biology 51, 445–477.
[4] HOGBEN LT. 1924. The Relation of Internal Secretion to Reproduction and Growth in the Domestic Fowl. The Veterinary Journal (1900) 80, 184–191.
[5] ERLINGSSON, S. J. 2013. Institutions and innovation: experimental zoology and the creation of the “British Journal of Experimental Biology” and the Society for Experimental Biology. The British Journal for the History of Science, 46(1), 73–95.

Extended Alt Text of the Timeline